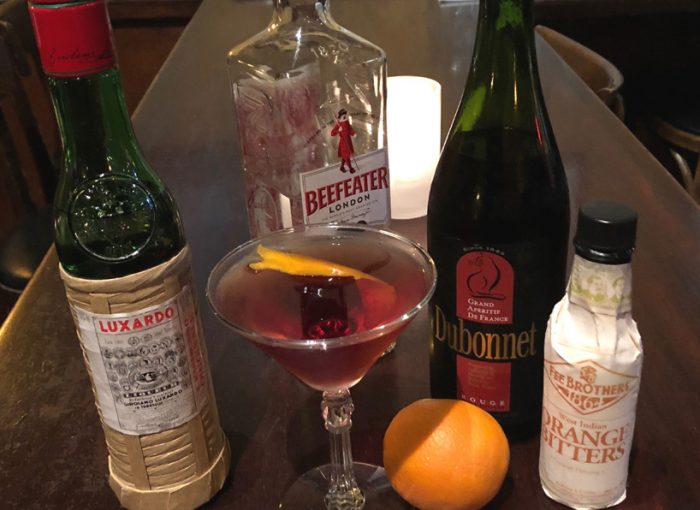 It kind of makes sense that there is a cocktail called Opera at CSC, considering that our neighbor is Mahaiwe Theatre and Mahaiwe Theatre is an HD multi-cast site for many things operatic, including, as I write this, The Exterminating Angel, which has its Met premiere this season, conducted by the composer, Thomas Adès.

But the cocktail Opera is on the cocktail menu for one reason alone: Opera is a tasty, interesting, and excellent cocktail. A cocktail from well before Prohibition, and a cocktail that Drinkboy.com guru Robert Hess says “highlights the value of orange bitters.”

You are correct, sir!

Opera also uses Dubonnet Rouge, which is a fortified wine aperitif like sweet vermouth, but with a hint of bitter that the Maraschino liqueur balances. Dubonnet remains a popular aperitif in and of itself (usually over ice with a lemon or orange twist), at least in those fortunate places where these alcoholic beverages haven’t gone out of bar inventory (you know, like France). One of my life’s ambitions is to help bring to America the pleasures of the aperitif, although the big push will arrive on Castle Street when our outdoor seating re-emerges, since the pleasure of the aperitif is amplified by drinking it in the sunlight.

Aperitifs also are wonderful as ingredients in cocktails. In Opera, Dubonnet provides a broadening to the gin (or, for those who don’t like gin, vodka) and a smooth mouth feel, while the Maraschino liqueur adds its own depth, while the orange bitters delivers both a wonderful citrus nose and the bass note that bitters typically add to a drink.

Opera is a Martini structured cocktail, and it even resembles the early Martini, which mixed gin and sweet vermouth and orange bitters. The Opera recipe appeared in Jacques Straub’s Drinks (1914), and was of equal parts gin and Dubonnet, along with a splash of something called Crème de Mandarine; which has passed into the mists of cocktail history. One of the strengths of Martini-family cocktails is that ratios are widely adjustable, and for today’s much drier preferences, we’ve both increased the quantity of the main liquor and reduced the quantity of Dubonnet. The now-mythical Crème de Mandarine is replaced by a small amount of Maraschino liquor, and the orange bitters provides the bitter notes that would have been an element of anything made from orange peels.

Combine the gin (or vodka), Dubonnet, Maraschino, and bitters in a shaker, add ice, and stir. Garnish in cocktail glass with dropped Luxardo cherry and orange peel rubbed on rim and twisted over the drink, and then dropped.

Opera is a big drink in a whole bunch of ways, but it is also a flexible cocktail in terms of ratios. Get to know the Opera: if you like it sweeter or drier, tell your bartender.