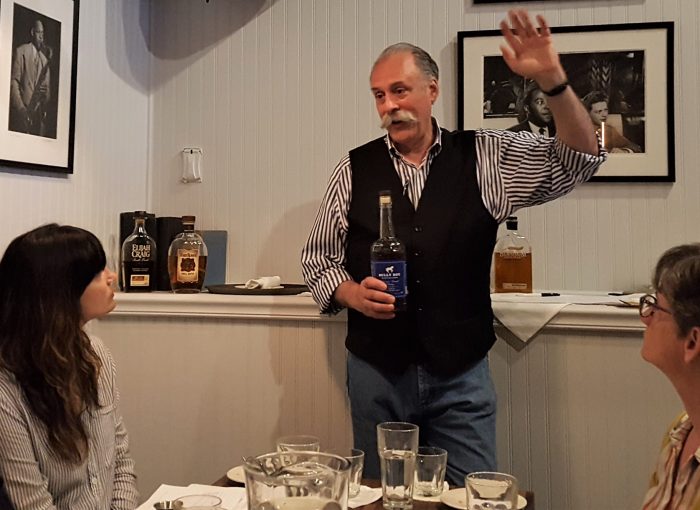 On April 30 (2018), the first whiskey tasting took place at Number Ten, as part of an open-ended Number Ten Symposium series.  The first one was called Number Ten First Symposium: Whiskey Tasting Test, ‘Lincoln, Lincoln, What’cha Been Drinking?’ The Number Ten Second Symposium just took place, and I’ll be posting the notes for that one soon (A Wry Old Rye and Other Tales of Aging). What follows is the hand-out notes given participants.

And the image above? Show of hands? No, simply me pontificating about Bully Boy American Whiskey, which is neither a Bourbon nor a Rye because neither of its corn or rye percentages pass the threshold. I find that Bully Boy passes the taste test, though.

What is American Whiskey? Is it bourbon, is it rye? Yes. But more.

This whiskey tasting offers bourbon and rye that are distinctive for their mash grain concentrations, and several American whiskeys that use unusual mash grains or combinations or blends that are outside of the Straight Bourbon or Straight Rye definitions.

Tasting notes for whiskey are usually broken out into four parts: appearance, nose, palate, and finish.

What makes whiskeys taste different, one from another? Grain mash, barrel conditions, length of aging in barrel, aging conditions for barrel, and attention.

Grain mash is the mix and relative amounts of grains that are fermented and then distilled.  Bourbon requires a minimum of 51% corn in its mash; Rye, 51% rye. The most typical grains are corn, rye, and barley, with wheat sometimes. Wheat can be the majority of grain in a mash, as in the case of Wheat Whiskeys, or a significant minority of the grain in a mash, as in Wheated Bourbon.

Generally, corn provides a taste profile of sweet, with common notes of caramel, vanilla.  Rye is typically spicier, with common notes of cinnamon, pepper.  Barley, the main or singular grain of Scotch, offers roasted, toffee, and cereal flavor profiles, although barley is typically a small percentage of American Whiskey grain mashes and so the presence of such flavor notes are often subtle.  Wheat usually offers a sweet nose and beginning sweetness on the front tongue that grows dry through the palate and finish; “bread with honey” is a common taste descriptor. Other grains such as oat tend to more strongly suggest tastes commonly associated with cereal tastes and often described as “chalky.”

Barrel conditions are important flavor contributors. For both Bourbon and Rye, the requirement is for a virgin (i.e., new) barrel made of America      n oak, charred (i.e., partially burned) inside. The amount of charring can vary, with some whiskeys using lightly charred barrels (e.g., Char #1 or #2) and some using more heavily charred barrels (e.g., Char #3 or #4). The more heavily charred the barrel is, the more wood sugars become available to interact with the distillate, and this contributes to caramelization, with such flavor profiles as brown sugar, caramel, or toffee. The charcoal lining the barrels also absorbs undesirable compounds through a kind of filtering action.

Barrel size is another important matter, with smaller barrels (e.g., 13 gallon versus 53 gallon) providing more interior surface area/volume interaction, and small barrel are sometimes used to “accelerate” the aging, although there is a lot of argument about just how well this process works.

Barrel age is a simple metric, although it can produce odd and complex results. All other factors being equal, the longer a whiskery is aged in barrel, the smoother and better integrated it will be. Some whiskeys, such as Rye, greatly benefit from long aging, largely due to the spicy or “biting” flavor the grain produces, so that longer aging makes for smoother Rye; four years is a good minimum, six or more years better. Ryes that are very young can present a taste note that some call “herbaceous,” although others are less poetic and name the taste “grassy” or even “spunky,” as what clumped wet grass scrapped from beneath your lawnmower might taste like.

Bourbon with little rye in its mash can do well with a minimum of 2 years in barrel, with longer times typically producing smoother Bourbon whiskey, although some mash bills and aging conditions can lose flavor complexity while gaining smoothness—there are Bourbons that are considered to be over-aged.

The former requirement of “Bottled-in-Bond” whiskey, has been two years although this regulation has recently shifted to a four-year minimum. (There are a couple of other requirements to “BiB” as well.)

Aging conditions can have a surprising effect on whiskey tastes—surprising both in the sense that the differences in taste from one barrel to another stored differently can be significant, but also surprising in that sometimes the results may be unexpected. Whiskey barrels are stored in warehouses, in frame racks called ricks, some barrels are low, some up near the roof, and temperature and humidity variation can be significant and noticeably change the amount of barrel/whiskey interaction. Many distilleries rotate barrels in the ricks to encourage consistent product.

Attention is an amorphous, hard-to-define element in the making and, therefore, in the tasting of whiskey. The experience and skill of the master distillers, the amount of effort expanded in monitoring the aging conditions, the choices of barrels to mix, or amount of water to add to bring into a specific proof (or the choice to offer the whiskey at “barrel proof,” the level of alcohol present in the whiskey at the opening of the barrel) are just a few factors that a distiller has to consider.

How to Taste Whiskey

Well, of course, drinking the whiskey helps in the process of tasting whiskery. But throwing down a shot is going to be a shallower experience than an attentive interaction with the whiskey.  Anyone with more than just a passing interest in wine has come across tasting notes that seem peculiar, with “hints” of saddle-soap, bubble-gum, tar, or licorice (red or black), Smarties ™, or burnt toast.  Wine has nothing on whiskey when it comes to imaginative descriptions, rest assured.

Rest assured that a lot of the descriptions are silly. But that doesn’t mean that we shouldn’t pay attention to our taste associations. The tasting notes provided can be thought of as a starting point, and you may wish to circle those flavors you too experience, and cross out those that you don’t perceive, and add any and all other notes of your own.

Appearance: How dark is the whiskey?  A dark whiskey suggests—although doesn’t prove—either a longer aged whiskey or a high char barrel or both. Start by holding the glass up to the light and take a good look.

Nose: bring your glass up to your nose and sniff and inhale deeply and think of the scents and the flavors the suggest. Is the scent of the whiskey spicy? Sweet? Fruity?

Smelling whiskey is a pleasure in its own right.

Palate: The tasting volume of the whiskey is seventy-five percent (.75) of an ounce, which for many is a comfortable mouthful. Bring the glass up to your lips, and draw the whiskey in slowly, letting yourself breath in the scent. As you slowly draw the whiskey in, it will move over your tongue. Get a sense of the whiskey’s mouth feel. Notice the shifts of flavor emphasis in the different parts of your mouth. Feel free to move the whiskey around your mouth and swallow. What are the flavors you experience? Do you like the taste? How smooth does the whiskey feel to you?

Finish: Finish is just what it sounds like, where you pay attention to the feel of the whiskey as you swallow, consider the changes in and duration of the after tastes. Is it spice that lingers? A sense of the char and oak? Lingering hints of mint? Is the sense of the whiskey gone quickly, or does it seem to hang in your mouth and in your perception?

Six whiskeys are presented in today’s tasting, and have been selected for their grain mash in order to illustrate how the grain mash mix plays a crucial role in the flavor of the whiskey.  We’ll start with a “high corn” Bourbon that has a large percentage of corn in its grain mash.  Second will be a “high rye” Rye; then a “high rye” Bourbon; a “corn-rye” neither Bourbon nor Rye whiskey; a corn whiskey; and ending with a wheat Whiskey.

After each tasting, pour some water into your tasting glass and take some sips. This helps clears your palate, rinses the glass for the next whiskey tasting, and helps with hydration.

Tasting Notes: Nose starts with vanilla and caramel and aged oak, then with some slight orange zest and citrus; palate also starts sweet maple and caramel, but yields to rye spice, and strong notes of oak and bitters; finish is long and strong, oak staying, as does pepper and cinnamon.

Tasting Notes: Nose presents the rye profile of pepper and citrus sweetness; palate starts sweet and syrupy on the tip of the tongue, candied peaches, and vanilla, followed viscous syrupy texture that bring black pepper and cinnamon/clove spices on the back of the tongue; finish is medium, with the pepper ongoing, until met with fruity sweet accompaniment.

Not Bourbon, Not Rye

Tasting Notes: Nose of vanilla and sweet wheat, with a hint of mint; palate of cinnamon, spearmint, muted butterscotch, and lemon and orange zest; finish short, crisp, with mint and citrus hints.